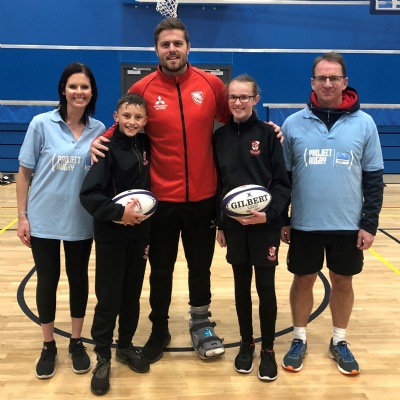 Five Acres High school took part in the 'Project Rugby' tournament organised by Gloucester Rugby Club on the 12th December. Six Schools entered, with Five Acres High School being the only school to take two teams and to have mixed teams.

The weather was horrible but the day was superb. Lots of great rugby played with loads of fun on top. With our mixed teams spread out evenly in terms of talent we finished 2nd and 3rd out of 6 which was pleasing. An added bonus of the day was a chance to meet current Gloucester Rugby Club 1st team Ed Slater. Ed gave a lot of time for Q & A and signed everything from phone cases to foreheads!

A special mention goes to Joby Fissenden and Lauren Creed who were picked out by Terry Fanolua and the other organisers for their level of skill and sportsmanship - they both received signed rugby balls. All in all, it was a great day out. A big thank you to Harvey Skelton, Terry Fanolua and Gloucester Rugby club!